The Discovery of Comet Nakamura-Nishimura-Machholz 1994m

When we moved from San Jose CA to Colfax, CA in September 1990, I had expected that I would build an observatory as soon as our house was finished.  The house was completed a year later but the observatory would not be built for two more years.  During that time, I had considered two observatories: one a small 8’x8’ rotating one to hold the 5” homemade binoculars, and a second larger roll-off roof observatory for my 10” reflector.  In time, however, I designed a roll-off roof observatory that could house both instruments.

This roll-off roof observatory had to be different than most, as comet hunting is often done low in the sky.  Therefore, the walls could not be very high unless they could be easily removed.  Meanwhile, the roof rolled down to the south, raised and lowered by a boat trailer winch.  Actually, gravity lowered the roof, it took 65 turns of the winch handle to bring it back up.

I began work on the observatory on July 31, 1993.  I was working five days a week so weekends and each evening after work was spent in construction.  The size would be 16’ running north to south and 10 running east to west.  The floor was in place by August 8 and a week later the walls were done.  The walls consisted of 12 panels that could be removed while the roof was still up.

By Labor Day the roof was completed, and the observatory was finished on October 2.

Inside I placed the homemade 5” binoculars, weighing about 150 pounds on a pipe mount on wheels.  The 10- inch reflector was mounted on an English Yoke mount.

For the first time in 18 years of comet hunting, I now had an observatory from which to work.  It had electricity and was elevated above the ground to keep out critters.

The year 1994 began with my writing of an article about a lost comet called Periodic Comet DeVico, seen for the first and last time in 1846.  The orbit calculated at that time and many times since then indicated that the comet should return on a regular basis, but it had not been observed since 1846.  I did not do original research on this comet and its orbit but found sources from the previous twenty years that seemed to indicate that it would be returning soon.  The article was written for The Strolling Astronomer, the publication of Association of Lunar and Planetary Astronomers (ALPO), of which I was the Comet Recorder.  This took much of the spring of 1994, and I completed it by late May.  Then, on September 18, 1995, I was one of those who independently picked up the comet.  None of us who recovered it got our names on it.

My next project was to write a book about the Messier Marathon, an activity that I helped to develop in the late 1970s.  The Messier Marathon is an attempt to find and observe the 110 galaxies, clusters, and nebulae cataloged by comet hunter Charles Messier more than 200 years ago.  This book would contain an atlas showing how to find the objects, and several chapters about Charles Messier, his catalog, and the marathon.  I started working on it on June 1.  It was a huge task and I wanted to have it completed by late October.  Then I would self-publish it.

My comet hunting continued unabated.  I had discovered my fifth and sixth comets in 1992 and was presently searching 270 hours per year, about 170 sessions yearly.  Since my sixth find on July 2, 1992, two more comets were visually discovered in 1992, none were found in 1993 and one was found in April 1994.  By the end of June, the first half of the year, I had done 114 hours of comet hunting for the year, shared between the 5” binoculars and the 10-inch reflector.

The big comet news in July 1994 would be the collision of Comet Shoemaker-Levy 9 with the planet Jupiter between July 16 and 22nd.  The comet was fragmented and so the pieces would slam Jupiter for nearly a week.  No one knew prior to the collision what the result would be.

The full moon was on June 23 and I began a series of comet hunting sessions in the evening sky on June 25, sweeping the western sky until moonrise in the east.  I was also out in the evenings of June 27, 28, 30, July 1, 2, and 3.  I skipped July 4 and the evening of July 5 so that I could be out all morning on Wednesday, July 6.  That session started at 1:00 AM, using the 5” binoculars.  I was covering the north polar region, starting at 42 degrees high (five degrees above the north star) and over the next couple hours picked up two faint galaxies: NGC 2268 and NGC 1530.  It was a warm night at 63 degrees F, and no wind. 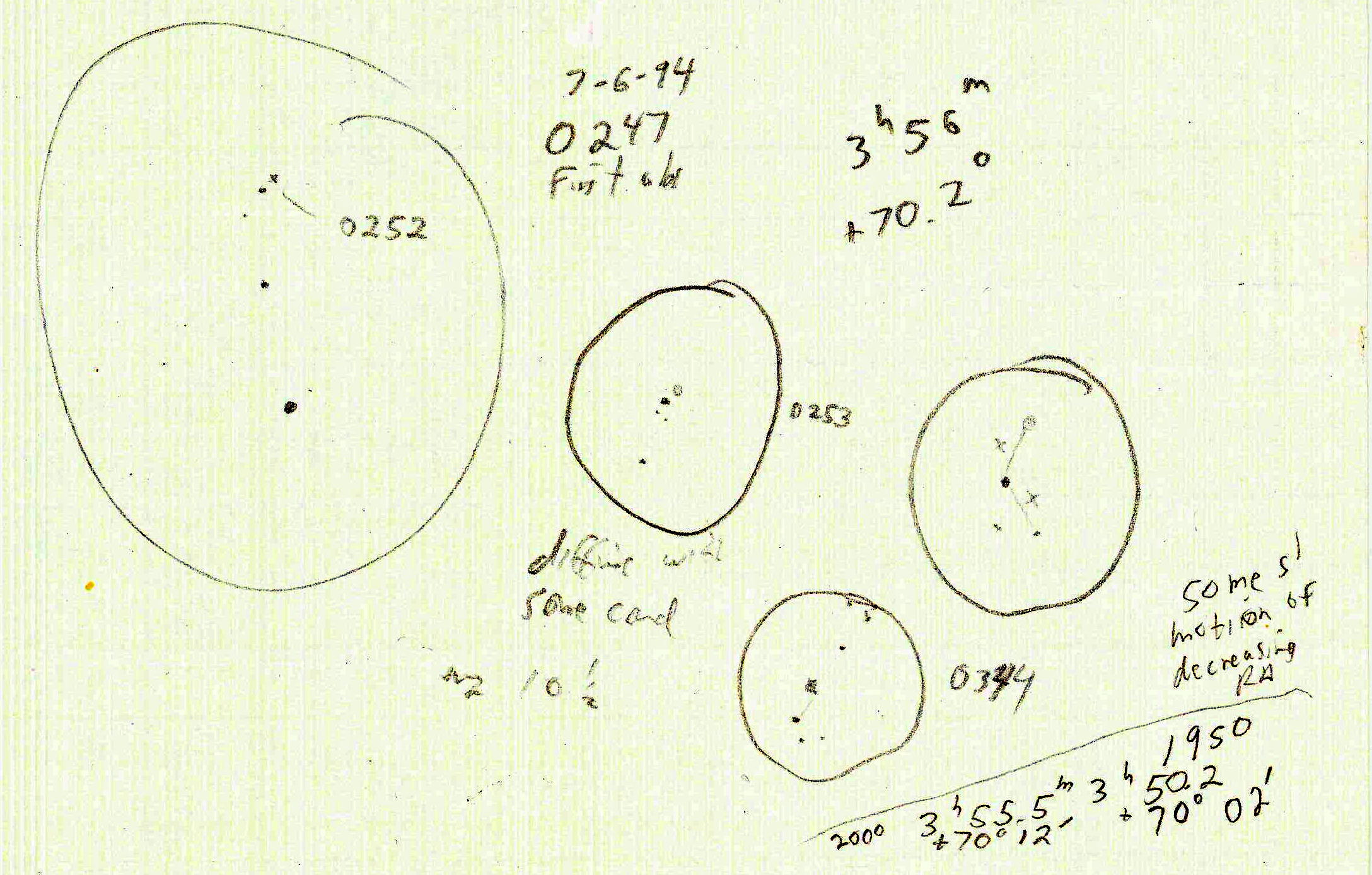 At 2:45 AM I heard a train passing through the town of Colfax, two miles away.  It was powering up, so I suspected it was heading north, up over the Sierras.  On the radio, the song “I Swear” by a group called “All-4-One” was playing.  It begins with “I swear by the moon and the stars in the sky”. 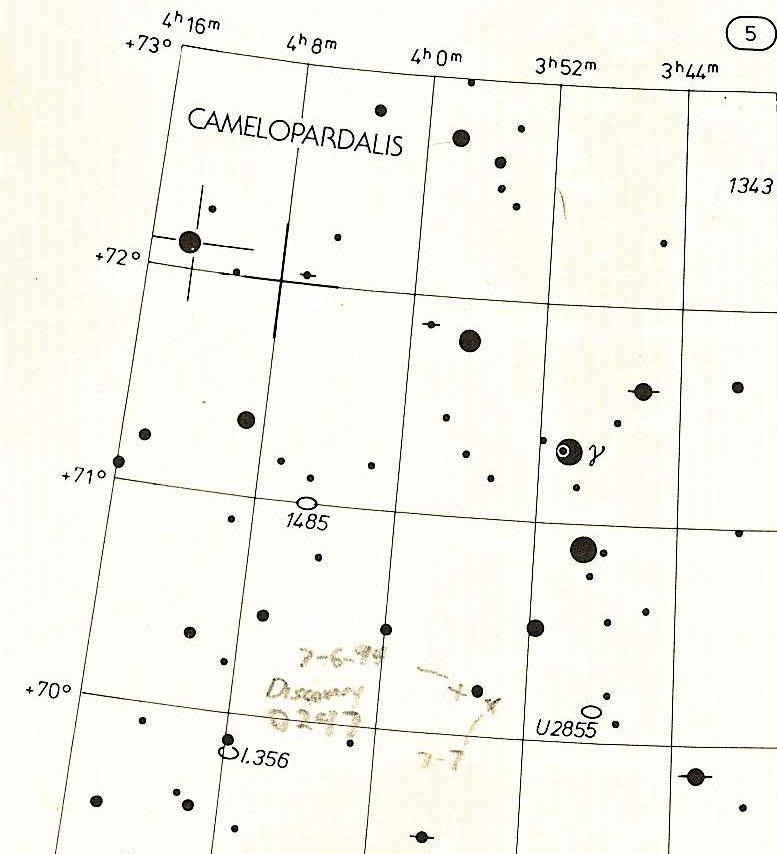 At 2:47 I picked up a fuzzy object, about magnitude 10, and almost immediately realized that this must be a new comet because I knew that no known object was in this area except for galaxy IC342.  It was two degrees away from this location so I went over to it and looked at it.  The object I had found was not this object.  Within five minutes I had made a drawing of it to check for motion and had plotted its location on my star atlas.

With 90 minutes until morning twilight, I had plenty of time to check the comet for motion and communicate with the Central Bureau for Astronomical Telegrams, of the Smithsonian Astrophysical Observatory (SAO).  So, I went into the house, turned on my computer, and dialed up the SAO at 3:07.

One of the services offered is a comet checker-you enter in the coordinates of your object and the program will tell you if any known comets are in the area.  I entered the position, the result was “No objects found”.  That was good news.  I then left a message: “I am presently checking out a possible comet at 03h 56m, +70.2 deg.  More later.”

I went back out to the binoculars and checked the motion of the object.  It had moved slightly with a decreasing Right Ascension.  I got my 6” Dynascope reflector telescope out of the garage and set it up on the front deck.  I then woke up my wife Laura and son Matt to look at the comet.  Both did and both could see it.  Before closing up for the morning I examined the comet with the 10” telescope to confirm it’s position, motion, and appearance.  I then went back to bed for an hour.

When I awoke it was business hours on the East Coast, so I called the SAO and talked to Dr. Marsden.  He said he was nearly late for a meeting but had seen my earlier message.  He then said that Eleanor Helin of Palomar had photographed it and gotten a position for the comet.  Dr. Marsden then confirmed my discovery position and data.  I then asked if anyone else had reported it and he said yes, two Japanese astronomers saw it before I found it, and it would have all three of our names on it.  He commented that this might be the longest name of any comet, 25 letters.  Actually, Comet C/1930 D1 (Peltier-Schwassmann-Wachmann has 26 letters and C/1955 N1 (Bakharev-Macfarlane-Krienke) has 25 letters.

All three of us used large binoculars to find the comet.  Nakamura and Nishimura were using commercially made instruments.  My binoculars were homemade by me in 1983.  The objectives are old aerial photography lenses with front lenses of 6.2 inches in diameter.  Each objective is made of five elements with the back one being 4.5 inches in diameter.  This was my fourth discovery with this instrument.

Looking through my notes, I was sweeping in the area on the morning of July 4, a session that began on the evening of July 3.  I swept for a while in this area, working my way downward in the northeastern sky, and stopped while still 10 degrees above the comet because I was tired.  If I had continued, I would have picked up the comet on July 4.  On July 6, when I actually did pick up the comet, I started where I left off on July 4th and continued working downward in the northeastern sky.  On June 11 I swept the polar region, covering an area above the comet and working downward, stopping about 10 degrees above it, then starting near the horizon and working my way up, this time stopping about 10 degrees below the comet.  On the evening of June 27, I also covered the polar region and either missed the comet while sweeping over it or, more likely, did not extend my sweep all the way to the right where the comet was due to a tree in that part of the sky.

I did several interviews for both radio and print, but most of the questions and interest was about Comet Shoemaker-Levy 9, which was due to hit Jupiter in two weeks.

The comet eventually traveled south, in early September moving at three degrees per day, and my last view of it was in late September 1994.  I tried to see it on my birthday, October 7, when it was only 8 degrees above my southern horizon but failed to see it.

Under the new comet designation system, introduced in 1995, the comet was renamed C/1994 N1 (Nakamura-Nishimura-Machholz).  In 2002 two faint comets were discovered by LINEAR.  They are C/2002 Q2 and C/2002 Q3.  Their orbits are nearly identical and they are linked to each other.  The orbital elements of these two comets are similar to the comet discovered here: C/1994 N1.

I found this comet 574.75 search hours since my previous find two years earlier.  I had searched on 337 sessions (mornings and evenings) since I found Comet 1992k.  The comet was 30 degrees high in my sky and 54 degrees from the sun.  In the summer it is useful to cover the polar region as the sun is far north and one can easily sweep to within 45 degrees of the sun even at midnight!

On August 6, a month after discovery, this comet passed to within 5.2 degrees of a comet that I would find a week after that date.  Then, eight weeks after that discovery I found my third comet in four months.